OELs are a measure for minimising worker exposure to hazardous substances in the workplace. Such limits are set taking into account the available information (including the most recent data) on the hazards of a substance, particularly with respect to carcinogenicity, mutagenicity and toxicity to reproduction, and on the acute effects of exposure.

OELs are established following a process involving a series of steps. The process for the substances being considered for binding OELs under the Carcinogens and Mutagens Directive (2004/37/EC) or the Chemical Agents Directive (98/24/EC), is the ordinary legislative procedure which is shown in the diagram below. Once agreed, these are binding OELs. Substances being considered under the Chemical Agents Directive (98/24/EC) for indicative OELs go through a lighter legislative procedure and a decision is taken by the European Commission. Once agreed, these are indicative OELs.

In addition, for certain policy initiatives the Commission will consult the social partners at EU level in accordance with the social policy provisions of the Treaty on the Functioning of the EU. 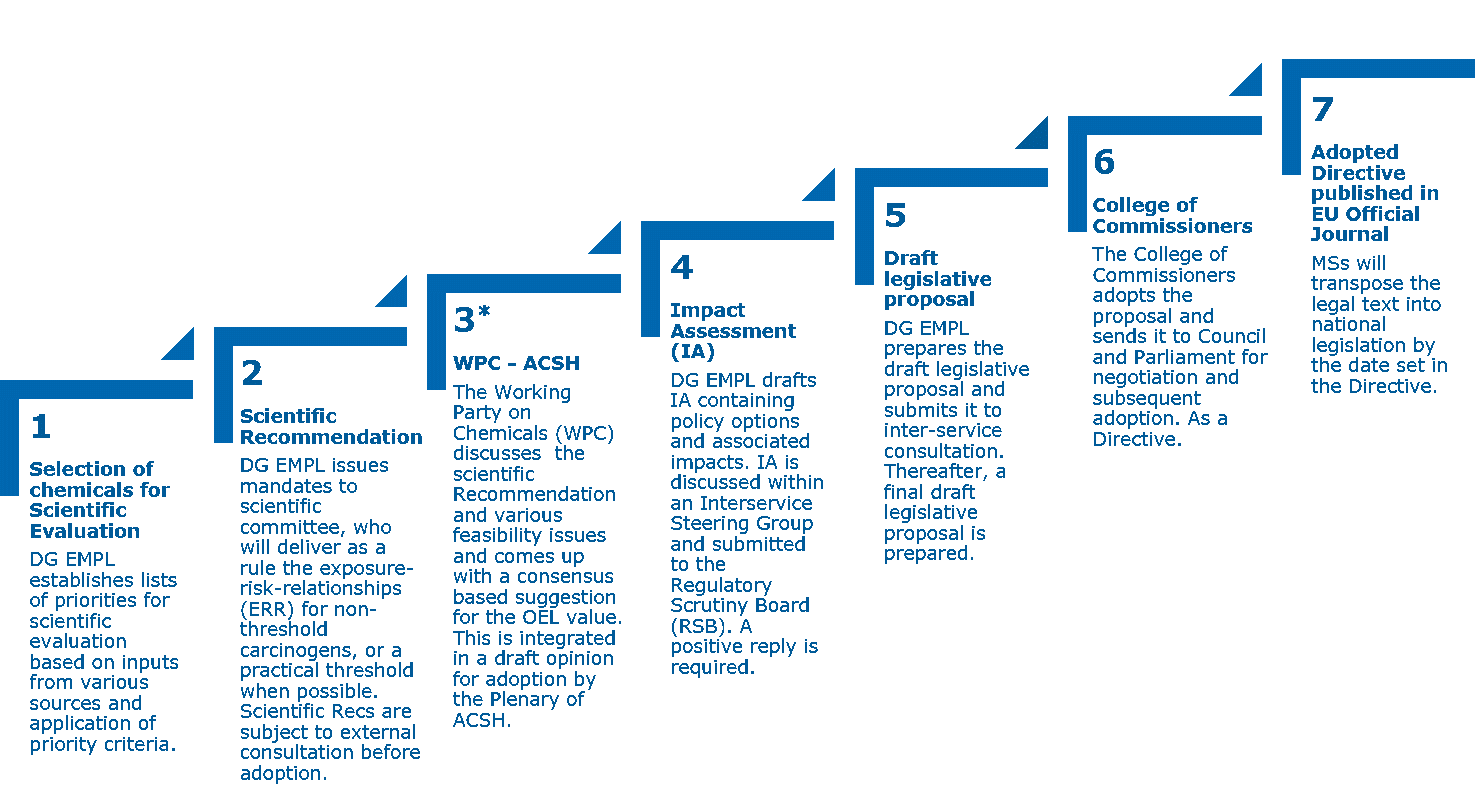 ECHA/RAC tasks in the OEL process

ECHA starts its work when it receives a request from the Commission to prepare a scientific report for consideration by RAC for substances selected from the DG EMPL lists of priority substances (Steps 1 and 2).

*When a substance is evaluated under the Chemical Agents Directive (CAD) and the occupational exposure limit is indicative, the decision is made by the European Commission.

**When a substance is evaluated under the Carcinogens and Mutagens Directive (CMD), the decision is made in agreement between the Council and the European Parliament based on a proposal put forward by the European Commission.

After RAC has adopted its final opinion on the scientific report, the opinion and supporting documents are sent to the Commission.

Commission tasks in the OEL process

The Commission (DG EMPL) discusses the outcome of the RAC scientific evaluation with Member States’ experts and the social partners (employers’ and workers’ representatives) in the tri-partite Working Party on Chemicals (WPC).

The WPC prepares a draft Opinion on the proposed OEL, which is presented to the tri-partite Advisory Committee on Safety and Health for adoption.

Thereafter, there are a number of other steps to be followed before the Commission can adopt a legislative proposal which then follows the ordinary legislative procedure for adoption by Council and the European Parliament (for binding OELs), or a Commission Directive (for indicative OELs).